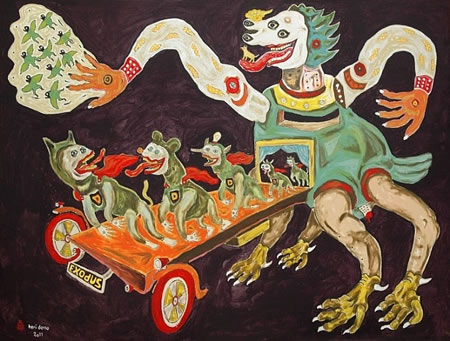 Modern Art is an all-encompassing classification for art created between the 1860s to the 1970s, and all of the major art movements during that same time period (Impressionism, Bauhaus, Surrealism, Expressionism, Art Nouveau, Art Deco, Photography as art, Pop Art, Minimalism, etc.) fall under its wide umbrella.
Modern art is a rubric is that taught extensively in many creative institutions today, as it enables students some of the widest examples and inspiration of how to express their individual artistic impulses in a variety of applications and means.
Various schools across the United States embrace the traditions, techniques and ethos of Modern art to inform their students of the historical context of modern art and how its pushed the boundaries of what is considered to be art.
The practitioners of modern art were trailblazers and mavericks who discarded or called into question the traditions and aesthetics of the previous ages (Classical, Renaissance, etc.) and experimented with revolutionary and groundbreaking ways and means of seeing the world around them, expressing it painting, sculpture and new artistic forms (i.e. photography), utilizing new and never-before-used materials and techniques, and sought new meaning in the overall purpose and functionality of art.
The so-called founding fathers of the modern movement include a pantheon of famous artists and their work — Edouard Manet, Vincent van Gogh, Paul Cezanne (impressionism) and Georges Seurat (pointillism) – to name a few, each brought a personal vision, aesthetic and style that is now considered the initial entries in the world of this art movement.
From the late 1890s to the 1930s, there was a veritable explosion of schools of thought that informed the art scene throughout Europe and the United States that helped spawn new artistic movements and collectives. During this period, the world witnessed the emergence of such heavyweight giants as Picasso (first in Cubism and then his own impressive diversions), Dali, Man Ray and Bunuel (Surrealism), and Munch, El Greco, Kandinksy (Expressionists). These artists and their myriad of contemporaries were figureheads and defined numerous movements that explored new emotions in creative expression.
After World War II “put culture on pause,” the United States became the epicenter for most new artistic movements and a huge number of art styles and traditions emerged in the 1950s and 1960s. As the 1970s came to close, art critic Douglas Crimp proclaimed “The End of Painting” in a confrontational essay,and thus the period known as Modern Art came to close.

Visit the Museum of Modern Art and Other New York Attractions

When we speak about New York, we often think of a highly urbanized place full of sky scrappers, busy streets, and people walking fast talking on their cell phones. But New York can also be […] […]

Modern interior design ideas are as varied as there are people who come up with them. The role of modern art pieces within the design, things like bronze sculpture, wood turnings, abstract paintings, stone etchings, […]

Modern art, incorporates canvas art, sculpture, print, and all the other new forms of twentieth century art. Scholars and historians rarely agree, as to the exact point when modern art began. Therefore, the term generally […]